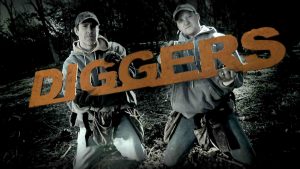 In the summer of 2013, the SGM Survey department received an out-of-the-ordinary request. Tim Saylor and George Wyant, better known as the stars of the National Geographic TV Show ‘Diggers’, were attempting to locate a time capsule that was buried on the Aspen Music School campus. The capsule was buried during the 1983 International Design Conference in Aspen (IDCA), but due to landscape changes, the exact location was unknown. The capsule contained, among other items, Steve Jobs’ personal mouse from his Apple LISA computer, and a six-pack of beer as a reward for whoever unearthed the treasure, placed by local architect Harry Teague.

Tim and George swept the campus with regular and high-powered metal detectors, thinking the six-pack would be a dead give-away of the location, but came up short-handed. Word got out around Aspen about the attempt to locate the time capsule, and one of the attendees at the conference was able to supply previously unknown coordinates. SGM surveyors were then brought in to pinpoint the exact location of the capsule. By utilizing GPS technology, Eric Englehart and Kyle Tesky led the team to the location, and helped unearth the capsule. The 13-foot time capsule was one heck of a geocache!

Were the ‘Diggers’ successful in their quest to find Steve Jobs’ mouse? You’ll have to watch to find out!